All About Eddy Current Testing 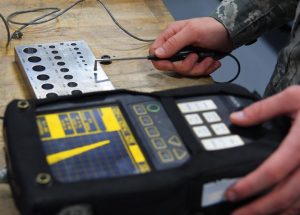 Eddy current testing (ET) is a common method of electromagnetic testing used in nondestructive testing (NDT). Before we get into the details of this type of testing, let’s start with the basics!

An eddy is the flowing, circular current of elements like water, smoke, and even air. So, eddy current testing involves using a flowing, alternating electrical current to create eddy currents on conductive material. If an irregularity is present in the material, it will be shown by the disturbance of the eddy currents.

Like other NDT methods, eddy current testing identifies defects in materials early on. Catching flaws ahead of time prevents major problems like creep (deformation caused by stress and elevated temperatures) or catastrophic failure (complete breakdown where recovery is impossible) from occurring in the future. When these problems are stopped, it keeps your rotating equipment and machinery functioning effectively and efficiently. It can also help prevent unexpected downtime, which can potentially save you money if downtime is not factored into the pricing of goods, services, equipment, etc.

Now that you know what eddy current testing is and how it works, let’s go over its advantages.